<  This is what we think Castle Bromwich church looked like in the 11th century. It was built by the Norman lord of the manor, one of the de Bromwich family. He built it so that he wouldn't have to go all the way to Aston church on a Sunday morning.

The picture was drawn in 1893 by the local architect, Charles Bateman.

The little stone chapel was used by the lords of Castle Bromwich and the villagers for 400 years. Then about 1450 the lord of the manor had a new, much larger wooden church built onto the small stone one.

Wood was used because there is very little stone around here. But there was plenty of timber: Castle Bromwich lay in the great Forest of Arden.

It is not known who had the new church built. It may have been Sir Walter Devereux who became lord of Castle Bromwich in 1462.

No-one knows what the medieval bell tower looked like. Charles Bateman was guessing when he drew his picture. But there are churches with small wooden bell towers like this one in Oxfordshire.

We do know that by the end of the Middle Ages there were three bells at Castle Bromwich. And if you go up into the roof, you can see that there are extra timbers at the west end to strengthen the roof. This may have been to take the weight of the tower and the bells.


The bells have been ringing at Castle Bromwich since the Middle Ages.

And 500 years later they are still ringing. Find out more at the Castle Bromwich Bell Ringers' website, which will open on a new page.

If you want to know more about the history of Castle Bromwich bells and bellringing on the this website, click here.

Inside Castle Bromwich church in the Middle Ages

A great deal of wood was used to build the church. The posts holding up the roof are over 7 metres tall; the trees must have been hundreds of years old when they were felled, grown from acorns that had fallen in the time of William the Conqueror.

Inside the church there was no ceiling, there were no seats for the people and most of the service took place behind a wooden screen and out of sight.

Unusually, the posts and the wooden roof of this medieval church are still there. When the church was rebuilt in brick in the 18th century, the old wooden chapel was left where it was and a new brick church was built round it.

There is very little evidence of the medieval church at Castle Bromwich, because the church was rebuilt in the 18th century. However, it is possible to make an intelligent guess as to what it was like by using the evidence we have and by looking at other churches where evidence has survived.

In the Middle Ages most people lived in small dark huts with no decoration or colour. Going to their local church must have been a magical experience for them.

The church was the largest building most people ever saw, except perhaps for the manor house. Inside the church it was all colour, lights, statues, paintings, ceremony, bells and the smell of incense.

Local people were very proud of their parish church. Those people who could afford it spent their money to make it more beautiful; those who couldn’t helped to look after the building.

The nave was the people’s part of the church. It was a large open space where the congregation gathered for church services on Sundays and holy days. But it was also used as a village hall. Castle Bromwich church was made of wood but it is thought that the walls were covered in plaster.

In the Middle Ages the walls would have been covered with paintings. Because people could not read and the church services were spoken in Latin which they did not understand, the pictures were there to show them stories from the Bible and the lives of the saints.

Castle Bromwich church was rebuilt in the 1720s and so no evidence of these paintings survive in the nave. However, in 1893 Charles Bateman removed some of the wooden panels in the chancel and he could see the colours of paint on the plaster wall behind. And up in the roof a curved piece of timber arches over the place where the nave joins the chancel. On it can faintly be seen the colours of medieval paint. In most other churches the wall paintings were covered with whitewash during the Reformation, although many have been rediscovered since.

Many churches had stained glass windows, showing scenes from the Bible and the lives of the saints. Many were smashed during the Reformation, although some people took them out and hid them before the officers arrived to destroy them. There is some old stained glass on display in Castle Bromwich church, although it dates from after the medieval period.

The stained glass is of high quality and was made in the Netherlands about 1590, during Queen Elizabeth’s reign. The windows show the horrible deaths of some of the church's martyr saints. The glass came here from Castle Bromwich Hall but it is thought that it was originally in the old church. Other stained glass windows in the church were made in the 19th century during the reign of Queen Victoria. They are copies of the medieval style. 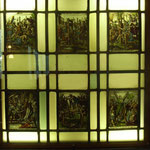 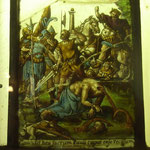 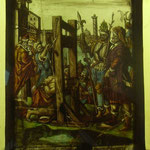 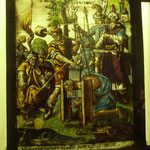 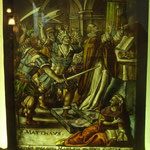 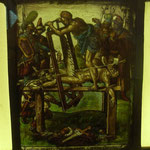 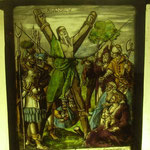 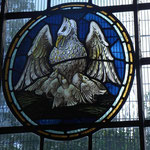 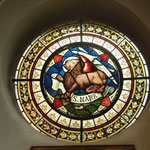 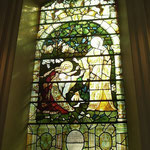 Separating the nave from the chancel was the rood screen. The screen was made of beautifully carved wood and colourfully painted.

The congregation could hardly see into the chancel, the holiest part of the church. They would hardly have been able to hear what the priest said and would not understand it anyway, as it was in Latin.

The picture shows a rood screen in Norfolk with a painted rood in the arch above it.

Above the screen was a wooden balcony called the rood loft. Sometimes the choir or musicians stood here. Rood is the Old English word for the cross on which Jesus died.

On top of the rood screen was a large statue of Jesus on the cross with statues of his mother Mary and his favourite disciple, St John. The photograph shows a 20th-century rood loft in Lincolnshire - no original medieval rood lofts now survive.

Only the priest and his servers were allowed inside the chancel which is always at east end of the church. The priest often had his own door into the chancel from the outside. The altar stood at the east end of the chancel churches and was the focus of the service. There was often a painted screen behind the altar perhaps showing Jesus’ Last Supper with his disciples. On the altar was a crucifix.

The chancel in the picture is at Ardleigh church in Essex. It is a 19th-century recreation of a medieval chancel.

which shows you the different parts of a medieval church.

This rare silver plate is now in Birmingham Museum & Art Gallery. It was the plate on which communion bread was kept 500 years ago at Castle Bromwich. It probably dates from the building of the new wooden church about 1460.

It must have been given by a very rich man (the lord of the manor?) as it would have been extremely expensive in 1450.

The symbol on it is known in Latin as 'Manus Dei', the hand of God and it represents God's care for the world.

The thumb and two fingers represent God as the Father, God as Jesus the Son and God the Holy Spirit.  When priests bless people this is the way they hold their right hand.