Tudors and Stuarts - and something in between

The Tudor and Stuart period marks the beginning of modern England and spans some 200 years. The period is named after the surnames of the monarchs who reigned. The Tudor family originally came from Wales, the Stuarts from Scotland.

The 'something in between' was the Commonwealth.

After King Charles I was executed, there was no monarch. For most of the time, the country was ruled by Oliver Cromwell, who called himself the Lord Protector of the Commonwealth of England, Scotland and Ireland.

3  James VI of Scotland became James I of England in 1603, the first of the Stuart family.

5  Queen Anne was the last of the Stuart family to rule the country.

Do you know which monarchs (kings and queens) are missed out here?

If you don't, there's a timeline on the Project Britain website of Woodlands Primary School.

Edward Arden of Park Hall and the plot kill the Queen

In 1536 Queen Elizabeth’s father, King Henry VIII had separated the Church of England from the Roman Catholic church. There would be religious troubles in England for the next 100 years.

In 1570 the Pope declared that, because she was not a Roman Catholic, Elizabeth had no right to be the Queen of England. As a result Elizabeth passed strict laws against Catholics. This encouraged some Catholics to plot kill the Queen.

On 25 October 1583 John Somerville set out from his home near Stratford to kill the Elizabeth. He was a Roman Catholic. On his way to London he stopped at a pub in Oxfordshire, where he told everyone about his plot, saying that he intended to shoot the Queen and see her head on a spike. It is not surprising that he was soon arrested and locked up in the Tower of London.

John Somerville was the son-in-law of Edward Arden of Park Hall in Castle Bromwich - unfortunately for Edward Arden.

The Arden family were Roman Catholics although,  because it was against the law, they kept very quiet about it. Secretly they kept a Catholic priest at Park Hall, pretending that he was the gardener.

Although there was there was no evidence at all that Edward Arden was involved in Somerville’s plot, both he and his wife Mary were arrested by Queen Elizabeth's soldiers and taken to the Tower of London to be questioned.

Somerville was tortured and named his father-in-law, Edward Arden as part of the plot to kill the Queen.

And so on 16 December 1583, Edward and Mary Arden were tried and convicted of treason, as was John Somerville. The penalty was death.

On the morning of the execution, 30 December 1583, Somerville was found hanged in his cell: he had committed suicide. Mary Arden was released. But Edward was taken to Smithfield where he was hanged, drawn and quartered. To the very end he said that he had not plotted to kill the Queen and that his only crime was that of being a Roman Catholic. After his execution, his head was placed on a spike on London Bridge for everyone to see.

Sir Edward Devereux and the first Castle Bromwich Hall - or was it?

(Actually he may not have done! There was certainly a manor house before this one, but it is not certain where it was. It may well have been a medieval hall on the same site.)

Sir Edward was created 1st Baronet of Castle Bromwich by James I in 1611.

Sir Edward Devereux was a lawyer and the Member of Parliament for Tamworth and High Sheriff of Warwickshire. He married Catherine Arden of nearby Park Hall whose father, Edward Arden had been executed for being involved in a Roman Catholic plot against Queen Elizabeth I.

No-one knows exactly what Sir Edward's hall looked like; Castle Bromwich Hall has been altered since then, but as he had lived at Sheldon Hall in Tile Cross, it is thought that his new hall may have looked similar to Sheldon Hall, which is now a pub and restaurant.

Edward died in 1622 and was buried with his wife in a fine tomb in Aston Parish Church. 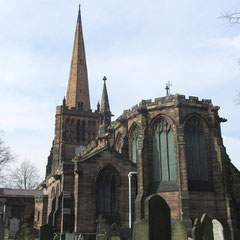 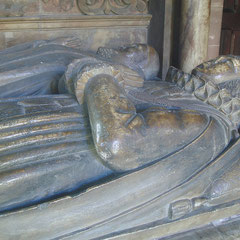 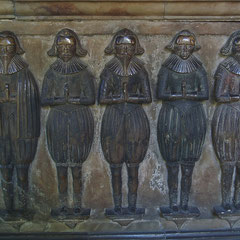 There's more about Castle Bromwich Hall in the Georgians section. When the Bridgeman family moved in, they weren't satisfied with Sir Edward's hall. They wanted to make it bigger and grander.

Although there were a number of battles and sieges in the Birmingham area, Castle Bromwich seems to have avoided the troubles of the English Civil War. The lord of the manor, Sir Walter Devereux was a supporter of Parliament, but he never lived in Castle Bromwich Hall.

The first battle of the Civil War actually took place in 1642 at Curdworth Bridge near Water Orton and just 3 miles from Castle Bromwich. An army of 700 Royalist troops (Cavaliers) were on their way from Kenilworth Castle to Tamworth Castle. They had just come through Coleshill when they were attacked by a Parliamentary force of 1200 men (Roundheads), who had come through Castle Bromwich from Birmingham.

The two armies faced each other in the fields by the River Tame. But the Parliamentarians found themselves struggling in the marshy ground by the River Tame (The road here is called Marsh Lane) and the Royalists made their escape over Curdworth Bridge to Tamworth.

20 men were killed and are buried in an unmarked grave in the churchyard at Curdworth.

Out went the old and in came the new.

In 1634 Sir Edward’s great grandson, Sir Essex Devereux was given Castle Bromwich as a wedding present by his father. Unfortunately, five years later, he drowned in a boating accident in Worcestershire. And so his wife Anne became lord of the manor of Castle Bromwich.

In 1647 Anne rented the manor to the very wealthy Richard Knightley of Fawsley in Northamptonshire. He was her 2nd husband after Sir Essex’s death. But ten years later she decided to sell the manor to Sir Orlando Bridgeman.

Some land in Castle Bromwich was still owned by members of the Devereux family until 1712, when George Devereux, a bankrupt draper from London, sold the last of the family's lands.

Orlando Bridgeman was a successful lawyer who fought for the Royalist cause during the Civil War. During the Commonwealth he managed to keep out of trouble with Oliver Cromwell.

With the return of King Charles II in 1660, he presided as Lord Chief Baron at the trial of the Members of Parliament who had signed the death warrant of Charles I.

In 1657 Sir Orlando bought Castle Bromwich as a wedding present for his son, Sir John Bridgeman. He too had trained as a lawyer, but his father was disappointed that he never actually worked as a lawyer.

As soon as he had the house, Sir John began work modernising it. The house had been built in Elizabethan style, but fashions had changed. Sir John must have thought that his new house looked rather old-fashioned.

He had a new entrance porch built in the fashionable classical style with columns on each side and carved stone statues representing Peace and Plenty. His coat of arms takes pride of place over the door.

When his son, also called Sir John, inherited the house, he too wanted to make it grander.

He had a third storey added making it much larger than before.

Although the hall has been altered since then, it still looks much as it did in the days of Sir John Bridgeman II.

If you want to know more about the Lords of Castle Bromwich over the past one thousand years, you've come to the right place. Click the coat of arms.

There were dramatic changes in the church in the 16th and 17th centuries.

If you want to know how the church changed and the monarchs who were responsible during the Reformation, click here.

Find out about Castle Bromwich church during the Reformation, click here.

Aston Hall was attacked in the Civil War. Click the picture to go to the Birmingham Museums website

which will open on a new page.


Little Woodham is a village near Portsmouth built as if it were in the 17th century; it was actually built in 1984.

Click on the BBC Bitesize logo to find more information about the Tudor & Stuart period - it is aimed at KS3.

on these BBC Primary History pages.

on a new page.