not even sleepy old Castle Bromwich!

Birmingham was a powerhouse of industry and invention. There were factories making a huge range of products that were exported all over the world. Most of the many factories were powered by steam engines which were fuelled by coal. The dense cloud of smoke from the factory chimneys could be seen even in the countryside at Castle Bromwich.

And farm produce from Castle Bromwich was sent to Birmingham to feed the increasing population: 74,000 people in 1801,

The Birmingham Journal newspaper described the scene in town in 1820:

On market days there was great business and bustle. Burly butchers and wily horse dealers wrangling with the country folks, droves of pigs and sheep and horses in New Street and runaway cattle in the Beast Market from the High Street to Dale End. From morning to night along the busy streets swept a tide of heavy carts for more than a mile.

And some of them had certainly come from Castle Bromwich

Queen Victoria was the longest serving monarch in British history, reigning from 1837 at the age of 18 until her death in 1901 aged 81.

(Her record was beaten by Queen Elizabeth II in 2015.)

The Victorian period is pretty much the 19th century.

The drawing shows in the foreground (left to right) the School of Art, the Council House and the Town Hall.  The railway lines at New Street Station can be seen (right centre).

In the background the houses are covered with a filthy blanket of smoke pouring from the hundreds of factory chimneys.

Apart from the few buildings mentioned above, pretty much everything in this picture has since been demolished and rebuilt.

Industry and business grew rapidly throughout the Victorian period in Birmingham. The city became known as the City of a Thousand Trades and the Workshop of the World. It was without any doubt Britain's Second City, a position it has held ever since.

In the summer of 1876 the Bridgeman family had an important guest at Castle Bromwich Hall.

Prime Minister Benjamin Disraeli came to visit the Earl of Bradford. He arrived by steam train from London at Stechford station and was then driven in a horse-drawn carriage to Castle Bromwich Hall.

To tell the truth, Disraeli had not really come to visit Lord Bradford. He had come to see Lady Bradford, Selina Bridgeman. The Prime Minister's wife had died four years previously after a marriage of 33 years. Now aged 72, he was desperately lonely. In recent years he had written frequently to the Countess of Bradford, sometimes three times a day! She gave him comfort in his grief. (Altogether Disraeli wrote nearly one thousand letters to Lady Bradford.)

While Disraeli was staying at Castle Bromwich, he paid a visit to Aston Hall and to the Aston Pleasure Grounds (now the site of Villa Park). There were all sorts of entertainments there: a theatre, a very large aquarium, sports facilities, art galleries and room for 10,000 spectators.

The following day the Countess of Bradford organised a garden party for Disraeli at Castle Bromwich Hall and she invited all the important people of the area: the Bishop of Worcester and the Bishop of Lichfield, the Marquess of Hertford, Lord Leigh of Stoneleigh, the Adderleys of Hams Hall, industrialist Sir Josiah Mason, the Calthorpes of Perry Hall, the Mayor of Birmingham Joseph Chamberlain and many others.


Unfortunately, on the day of the garden party there was a terrific rainstorm and many of the guests did not arrive.

Instead of the party taking place in a marquee in the Hall gardens, the event was moved inside the Hall.

However, the next day the weather improved and Disraeli and Lady Bradford drove around the local area in his carriage waving to the local people who had come out to see the Prime Minister.

In the afternoon Lady Bradford invited 80 children from the church school for a picnic at the Hall. The Castle Bromwich schoolchildren were served with sandwiches and cakes and drinks by the noble ladies. Afterwards the children's games were watched by Prime Minister who showed great interest in them.

Disraeli wrote afterwards to the Countess of Bradford that his stay at Castle Bromwich was ‘the happiest visit I ever paid and the memories of which will sustain and animate me in my solitude.’

The story is (though whether it is true or not, no-one actually knows), that a telephone was put in the Post Office at Castle Bromwich while Disraeli was staying here. As Prime Minister he needed to be in touch with his government in London.

It is said that this was the first telephone to be installed in a post office outside London (though whether it is true or not, no-one actually knows!)

Other VIPs at Castle Bromwich Hall

One week after Disraeli's visit, the Duke of Teck stayed at the Castle Bromwich Hall with his daughter, Princess Mary of Teck. They were close friends of the family and had come to Birmingham for the famous Music Festival with the Bradfords. Princess Mary would later marry the Duke of York and become Queen Mary.

The Bridgemans knew many Very Important People, royal, rich and noble, and they would often entertain them at their country home,

In the 18th and 19th centuries Castle Bromwich was country area bit it was close to Birmingham. It was very convenient for businessmen to live here. There were a number of large houses belonging to wealthy people in this area. All have now been demolished now, except Castle Bromwich hall and Southfields, which is now the Remembrance Club.

Below (left to right):

Whateley Hall was built in the 18th century and may have been built on a the site of a medieval hall. It was demolished in 1935 and houses built on the site. It was the biggest house in Castle Bromwich after Castle Bromwich Hall and had a very large area of garden.

(Click here for some information about some of the people who lived at Whateley Hall.)

Eldon House was also probably built in the 18th century. It stood opposite the church and was the Rectory. It was demolished in the late 1970s and No.1 Kingsleigh Drive was built on the site.

Timberley House was also an 18th century building. It was demolished in the 1930s and the Castle Cinema was built on the site. Tesco supermarket was built there in the early 1960s.

The Cedars built in the 19th century. Alderman Clayton lived here, the owner of the large canal transporting company, Fellows, Moreton & Clayton. Cedar Avenue was built on the site in the 1950s.

Sorry about the quality of the photographs below! They look fine until you click to enlarge them :( 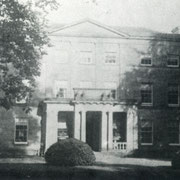 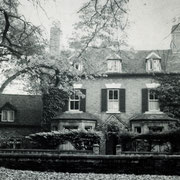 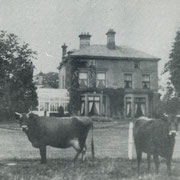 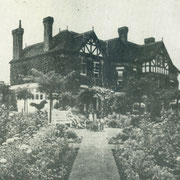 What about the ordinary folk?

The information here comes from a website called the Warwickshire Ancestors Project run by volunteers to let people see the 1841, 1861 and 1891 Census information free, for nothing and at no cost.

To find the 1841 Census for Castle Bromwich online, click here.

(Castle Bromwich is included with Aston of which it was part.

To find the 1891 Census for Castle Bromwich online, click here.