Birmingham businessmen and factory owners were quick to see how useful the railways could be in transporting the things they made. They set up railway companies to connect Birmingham with the sea ports of Liverpool and London from where their products could be exported throughout the world.

The Grand Junction Railway from Birmingham to Liverpool opened in 1837 and the London to Birmingham line in 1838.

The following year the Birmingham & Derby Junction Railway opened; in 1842 the original route was altered to bring the railway close to Castle Bromwich.

Lord Bradford agreed to the plans as long as the company would build a station at Castle Bromwich. It is also said that he would not allow trains to stop here on a Sunday.

Castle Bromwich station was not in Castle Bromwich! It was just north of the River Tame which marks the boundary of the ancient manor. So it was actually in the manor of Minworth. However, Castle Bromwich was the nearest village to the line.

The famous railway engineer, George Stephenson surveyed the route and was then appointed as the Chief Engineer of the railway company. Stephenson was soon so busy building railways across the country (This was railwaymania!) that he handed the job to his son, Robert.

It took three years to lay the track from Derby to Hampton-in-Arden and another three years to bring the line from there through Castle Bromwich into Birmingham. 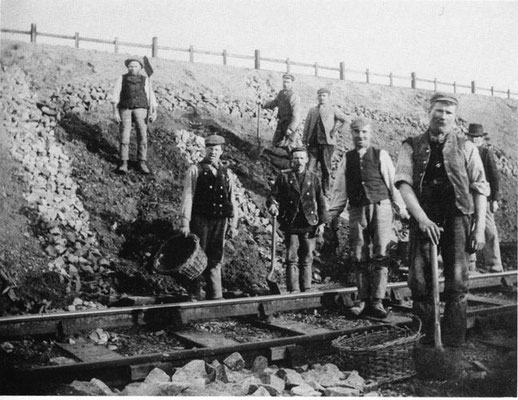 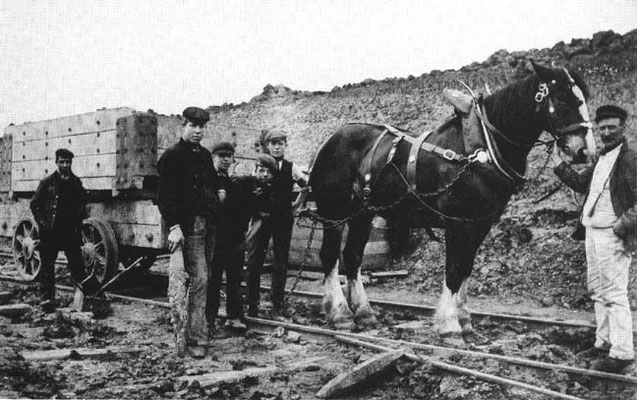 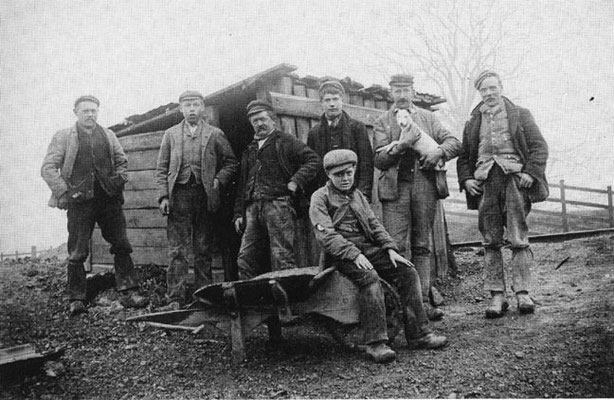 Railway excavators were the men who built the railways; sometimes they were called 'navigators' or 'navvies'. They worked long hours for little pay and travelled around the country working where new railways were being built and often lodged with local people.

To see the excavators who were staying in Castle Bromwich to build the Birmingham-Derby railway line, check the 1841 Census (opens on a new page).

Search for "Castle Bromwich", then search for "excavator". You will also find excavators living in other places nearby.

The first trains took 2½ hours to travel the 50 miles from Birmingham to Derby. Fares cost 10 shillings for 1st class travel (in a yellow carriage), 7 shillings for 2nd class (blue) and 5 shillings for 3rd class travel in an open carriage (brown). Although the open carriages were very little different from cattle trucks, 5 shillings was more than most people could afford. By 1850 there were three trains a day stopping at Castle Bromwich on the way to Derby and four heading to Birmingham.

In 1879 a new line was built from Castle Bromwich to Walsall and Wolverhampton and soon over 20 trains stopped every day from Monday to Saturday, but still none on a Sunday.

By the end of the century the line at Castle Bromwich had become so busy that two extra tracks were laid. Because of this the station was rebuilt in 1902.

In 1920 the British Industries Fair opened alongside the station. This was an exhibition centre where businesses could show off the products they made.

(Click here to see the main article about the BIF.)

Exhibitions were held in May and grew bigger every year. Tens of thousands of visitors came from all over the country and most of them arrived by trains at Castle Bromwich station. The last exhibition here was held in 1957.

In 1948, for the first time, two trains stopped at Castle Bromwich on a Sunday.


By the 1960s the railways in Britain were losing money. More people were driving cars, there were many more lorries and less people and goods were travelling by train. There were some lines and stations in the country which were hardly used at all.

In 1963 the government asked Dr Beeching to write a report telling them how to save money. He told them to shut half of the railway stations and to close a third of the routes.

Castle Bromwich station was one of the stations to be closed. Although there were 30 trains a day running along the line, after 1968 none of them stopped at the station. The station buildings and the platforms were demolished soon afterwards.

The map shows where the station stood on the Chester Road. There is nothing to see there now.

But if you zoom in on the map, you will be able to see where the two outside lines separate. This is where the platforms used to be.

If you lose your place on the map, press function F5

on your keyboard and you can start again.

For more information on Castle Bromwich station, go to the Disused Stations website (opens on a new page).

A new station - for cars

In 2003 the Castle Bromwich Jaguar factory opened a railway terminal to take new cars from the factory to Southampton docks to be shipped across the world. Each train carries 176 Jaguars which previously would have needed 22 lorries to transport them.