This is Derby College. Inside the clock tower hangs a bell which chimes every hour.

The bell is one that was made in 1717 and it comes from Castle Bromwich!

How did it get there?


The five bells of 1717, made by Joseph Smith of Edgbaston, hung in the church tower at Castle Bromwich church and rang out across the village and the fields.

When the bell frame was built, it was made to hold six bells. Sir John Bridgeman II must have hoped to fit another bell at some time in the future. But this did not happen in his lifetime.

New ropes were fitted from time to time, sometimes the moving parts needed oiling or the woodwork had to be repaired. But nothing more was done to the bells for another 176 years.


Then in 1893 George Bridgeman, 4th Lord Bradford decided to have a sixth bell cast. This was in honour of the marriage of George, Duke of York and Princess Mary of Teck; they would later become King George V and Queen Mary.

Lord Bradford's wife, Lady Ida was a close friend of Princess Mary; indeed the princess came to Castle Bromwich Hall to stay with Lady Ida and visited the church.

The man chosen to cast the new bell was Charles Carr of Smethwick. He hoped to fit the new bell in the space left in the frame, but it was not to be. The bell was too big and a new wooden frame had to made from oak.

But worse was to come. When the bells were rung, the No.3 bell was found to be out of tune with the other bells and so Charles Carr had to make a new No.3 bell. But he soon found a home for the old No.3.

The bell hangs there still, ringing out the hours.

The other Castle Bromwich bells were melted down in 1952 and recast. So the Derby bell is the only one that remains from the ring of bells paid for by Sir John Bridgeman II.

﻿The mark of Joseph Smith

Bell founders usually mark their bells with their name or a badge to show who cast the bell. This is the mark of Joseph Smith of Edgbaston who made Castle Bromwich bells in 1717.

Charles Bateman and his father, James were both architects and they lived in the first two houses in Rectory Lane, houses which they had built themselves. (Charles' grandfather Joseph had also been architect in Birmingham.)

Both of them were well-known in Birmingham and many of the buildings they designed are still standing. Charles also built his own house in Rectory Lane and, almost opposite to it, Lord Bradford paid him to build a large house for the Rector. There is also a handsome house in Kyter Lane he built called 'Old Walls'.

But Charles Bateman is famous for a building that he did not design or build.

It is for his discoveries about the history of Castle Bromwich church that Charles Bateman is best known to local people.

Above the entrance inside the church door is an inscription saying that the church had been rebuilt between 1726 and 1731. However, it was known that there had been a church here since 1165. and there are records of a church being here over many years.

But everybody thought that the old church had been knocked down and that the lord of the manor, Sir John Bridgeman II had a new one built.

In 1893 Charles Bateman was asked to do a number of jobs on the church. Before he set to work, Bateman carefully inspected all parts of the building.

High above the church entrance is a trapdoor in the ceiling. It is over 7 metres above the level of the floor. Bateman had a long, long ladder put up and climbed into the roof to inspect the woodwork up there.

When he shone a light into the darkness of the roof space, the architect could see the 18th-century beams that held up the roof. They were slender and roughly finished. That didn't matter: there was a ceiling in the church and they weren't meant to be seen.

But when Bateman clambered further into the darkness, his light showed much larger beams, great long solid pieces of wood. He realised with a shock that this was not 18th-century but medieval woodwork. And if the roof was medieval, then the pillars in the church that held it up must also be medieval.

It is the only one like it in the whole country.

His discovery led him to investigate further. In the chancel by the altar, he took away some of the 18th-century wood panelling. Behind the panels was a wall made of stone. It was part of the original Norman chapel that had been built in the 12th century, over 700 years before.

Charles Bateman, architect of Castle Bromwich discovered that his local church was not at all what it seemed. He learned that you can't judge a church by looking at the outside!

Below: Charles Bateman drew how he thought the inside and the outside of the church looked; he also drew the actual woodwork that still remains from the Middle Ages. 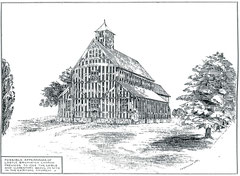 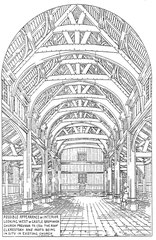 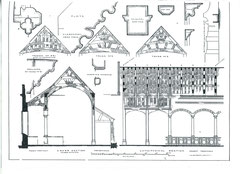