Just past New Street, on the opposite side of the road, look at

‘The Castle' was built in the early 1700s, perhaps during the reign of King George I.

It is now a private house, but it was a small grocer’s shop for many years.

Before that it was the Castle Inn.

This was not a coaching inn like the Bradford Arms and the Coach & Horses which catered for travellers between London and Chester. The Castle was a small local pub for the people of the Castle Bromwich village.

This narrow stretch of busy road was constantly blocked with the horses and carts of Castle Bromwich people visiting the pub and so Lord Bradford closed the pub in 1907. It opened as a grocery shop the next year.

In 1988 the shop closed and the building was restored as a private house.


Opposite 'The Castle' are a pair of old cottages; they were probably built early in the 19th century. There used to be a lot a small houses like this along the Chester Road. Many of the people who lived in them had jobs working on the farms in Castle Bromwich. These cottages belonged to Joseph Dowler in 1802 who was a blacksmith and wheelwright.

The 1841 census lists many Castle Bromwich people as agricultural labourers; there were also shepherds, stable boys and gardeners. In 1841 there were many workers employed as excavators: they had probably been building the Birmingham to Derby railway which runs through Castle Bromwich. A station was opened on the Chester Road the following year.

Left of the cottages is a house that was built in the late 20th century; the white house to left of that used to be a butcher's shop until about 1989. Behind the butcher's was the slaughter house. Cattle were brought by train to Water Orton station and then herded along Water Orton Road to a yard at the back of the shop. They were left overnight and slaughtered the next morning before the meat was sold to other butchers as far away as Ward End.

Look left again and you will see the Victory Hall. This was opened in 1922 by Lady Ida, the Countess Dowager of Bradford, to celebrate the end of World War 1. It is now used by Castle Bromwich Community Church.

And left again is the Church Hall. Built in 1900, it is now the Castle Bromwich Men’s Club.

Across the alley, the maisonettes stand on the site of the Church School. This was built in 1886 and the old wall is still there. It was rebuilt as St Mary & St Margaret's School in Southfield Avenue in 1960.

Two Victorian cottages now made into one opposite

The Victory Hall 1922 celebrates the end of the First World War. 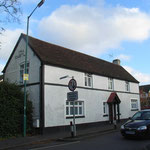 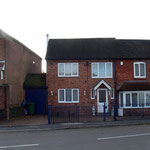 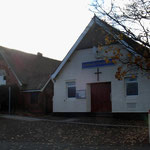 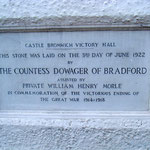 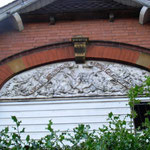 Walk up the little alley between the maisonettes (on your left)

and the old Church Hall (on your right) to The Green.

The Green was orginally known as Seven Acre Green and was probably open land where the people of Castle Bromwich could let their cows and sheep eat the grass. In 1802 the Green was much larger than it is now, with only one or two houses built around it near the Chester Road. There was a very large pond in the middle of the Green. Even in 1900 there were not houses built all around the Green as there are now.

Around 1802 all the open land was shared between local people, although it was the large landowners who got most. The Green went to Lord Bradford. However, in 1895 Lord Bradford gave the Green to the people of Castle Bromwich - and it still belongs to us now.

The small white house to the right of the Coach & Horses was built in 18th century. By 1900 it was in use as a blacksmith's and wheelwright's workshop.

John Williams and his younger brother Arthur (nicknamed Clogman because of his old-fashioned boots) had joined their father's business (He was called John too.) The family had been blacksmiths in Castle Bromwich since the 18th century. John Williams was a bellringer at Castle Bromwich church.

The first Coach & Horses inn stood in front of the present one. It was an 18th-century coaching inn serving travellers on the London to Chester Road. When the stage coaches stopped running in the middle of the 19th century, the pub became a place for local working men to drink large quanties of beer. And so in 1920 it was knocked down and rebuilt further back from the road in a Tudor style with an old-fashioned thatched roof. It was designed to be a respectable eating place where families with children could go. The architect was Charles Bateman.

Unfortunately a spark from a chimney caused the thatched roof to catch fire in 1938. Bateman rebuilt the pub in a similar style, but this time he put on a tiled roof not a thatched one. The pub is still there.

and the Headmaster's House

To the left of the pub car park entrance, the house with the triangular garden was the village police station until the early 1970s. At that time the district came under the Warwickshire Constabulary. The village fire fighting equipment was kept here. However, when the Coach & Horses next door caught fire, the equipment had been badly maintained and was no use at all.

Next door to the police station was the Headmaster's house for the old St Mary & St Margaret's School on the Green.

The Methodist Chapel and the old Schoolhouse

Far left of the pub was the Methodist Chapel. In 1917 it was demolished and houses built there. A new church was built further down School Lane (on the other side of the Bradford Road at Cat Lane). Opposite the new church is the first Castle Bromwich schoolhouse which was set up in 1703 to educate ten poor children.

The Altar of Remembrance

At the junction of the Green and the Chester Road stands the Altar of Remembrance honouring the dead of two world wars. It was designed by C E Bateman.

A tablet has since been added below the altar 'In memory of those whose have died in conflicts since 1945'.

A service of remembrance has been held here every year on Remembrance Sunday (the Sunday nearest to 11th November) which is attended by Castle Bromwich people old and young.

and the Weavers' blog which lists all the names on the war memorial.

Until the 18th century local people had to look after the roads in their parish. Few people minded paying for roads that they used themselves, but there was a lot of bad feeling about paying for long-distance travellers who were just passing through the village going from London to Chester.

The government allowed private companies to be were set up to improve the roads. They were allowed to charge people at tollgates every few miles. The Chester Road was part of two roads: one from London to Chester, the other from Birmingham to Coleshill. A tollgate was put across the road in 1759 which stayed here until 1877. The toll collector lived in a small house by the gate which has gone now. The 1841 Census lists the toll collector as Henry Simpson; in 1861 it was John Smallwood.

One of the cottages on the Chester Road opposite The Green is named Tollgate Cottage. This was not the toll house but a house built near the tollgate in the early 19th-century.

One old house here has an old fire insurance sign on the wall. In the days before there was a public fire service, some people took out a fire insurance policy. If their house caught fire, the insurance company's engines would come to put out the fire. But only if you were insured with them.

Click here to go to the last part of the Castle Bromwich Village Trail.