Click again and it will get a little larger!

They are a rare example of a formal style of gardening which was popular in the 17th and 18th centuries; most gardens like this have been completely redesigned over the years.

There were other large houses in the Birmingham area like Castle Bromwich Hall, but nearly all of them have been demolished and none have gardens which still exist.

When John Bridgeman I moved into Castle Bromwich Hall in 1657, he had it enlarged and altered to make it more impressive.

He wanted his gardens to be laid out in the fashionable style of the day. That style was influenced by the formal gardens of palaces in France and Holland. Charles II, who became King in 1660, had lived in France and he admired the gardens of King Louis XIV’s Palace of Versailles. When Charles began to design his gardens in a formal style, other wealthy people of England wanted to do the same.

The garden was set out in separate areas rather like rooms, some for flowers, some lawns, some for vegetables or fruit trees. Low hedges were used to create geometrical patterns. The garden was surrounded by a wall to protect the plants from the wind and the weather. There were long walks through the garden leading to avenues of trees with parkland beyond. The idea was to show that human beings had control over nature.

Sir John Bridgeman was helped by his cousin's husband to design his new garden. William Winde (rhymes with find) was an Englishman who had been brought up in Holland where he had seen the style of gardens there. William Winde worked with Sir John's wife, Mary on the garden and the two often wrote letters to each other, many of which survive.

Sir John II continued his father's work on the gardens and extended them to the west to cover an area of almost 5 hectares, about the size of ten football pitches.

In 1762 the Bridgeman family moved to Weston Park and Castle Bromwich Hall was rented out. The gardens were kept in good order but the design was left unaltered.

Meanwhile, the style of gardening changed. Garden designers encouraged wealthy people to create an artificial countryside around their houses. Large areas of grass were laid out with long views into the distance with trees and wood and streams and lakes.

At Weston Park, the famous garden designer Capability Brown laid out 1000 acres of parkland for Sir Henry Bridgeman at a cost of some £12,000 - in today’s money this would be millions of pounds. He built Roman-style temples and bridges in the landscape. If the Bridgeman family had still lived at Castle Bromwich, the same would certainly have happened here.

The formal gardens were kept in good order, but left unchanged, until Lady Bradford died in 1936.

But when the Hall was rented out as offices after the Second World War, only the grass was cut and the rest of the gardens were abandoned. Everything became overgrown. The bushes which had been cut as neat hedges grew into tall trees. The walls and the buildings began to fall down.

In 1983 the West Midlands County Council sent officers to look at the gardens to decide what should be done with them.  Despite their having been abandoned and overgrown for 50 years, the council officers realised that the pattern of the old gardens still lay there, unchanged after 200 years.

So in 1985 the local councils with Lord Bradford formed the Castle Bromwich Hall Gardens Trust to restore the gardens and to open them to the public. 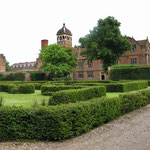 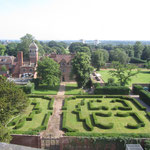 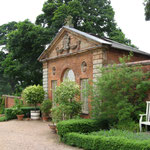 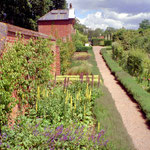 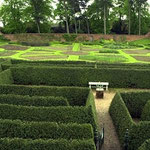 Do you want to find out more about the Hall Gardens?

The Parkland outside the Gardens is the next stop on the Castle Bromwich Village Trail. It's a wild place to explore. But watch where you tread: people like to walk their dogs here and some of them don't clean up their dog's poo!

An avenue of horse chestnut trees runs down from the west end of the Hall Gardens across open parkland.

This is a Local Wildlife Site. There are many different types of plants and there are areas of wetland which provide habitats for wild animals. Rare great crested newts have been found in this area.

In 1979 a housing developer wanted to build houses here, so Birmingham City Council bought the land to prevent that from happening. The parkland is now looked after by the Castle Bromwich Hall Gardens Trust. 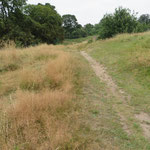 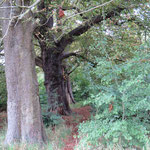 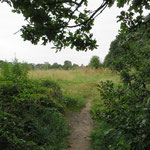 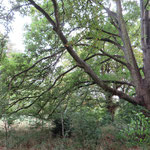 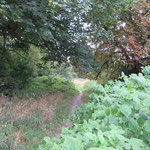 As you come back onto the Chester Road, look to your left. This is a dead-end for cars now. A footpath leads down to the motorway island for pedestrians.

But for thousands of years the Chester Road went down a steep slope here. It was called Mill Hill because Castle Bromwich watermill used to be at the bottom of it by the River Tame. the site is underneath the M6 motorway now.

It is hard to believe but this is the route that stage coaches took carrying passengers between London and Chester. It was the first stage-coach route in the Midlands and began running in 1659 (when King Charles II came to the throne).

Mill Hill cannot have been an easy hill to climb for a coach and horses, especially in winter. When there were roadworks here recently, the soil could be seen to be red clay. This gets very slippery and slimy in wet wintry weather and bakes rock hard in the hot summer sun.

Stage coaches continued running along this road until the 1830s with only one year’s gap during the Great Plague in 1665.

Click here to go to Google Maps Streetview. The map will open on a new page.