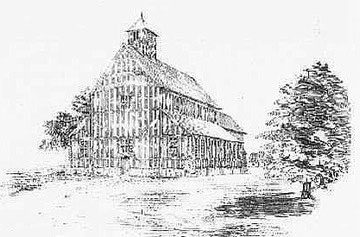 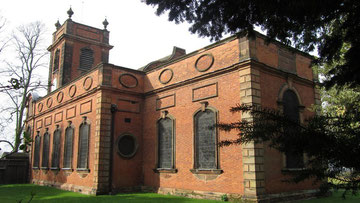 If Sir John Bridgeman II thought his hall looked old-fashioned and needed upgrading, what must he have thought of the old timber church?!

Even before he had finished rebuilding the Hall, he set to work on the church - all paid for by himself. The work took five years from 1726 to 1731 and it is thought services were held in the church throughout the rebuilding.

But this is a very unusual rebuilding.

In the Middle Ages there were quite a number of wooden churches in forest areas like Castle Bromwich. There are hardly any now because they were later demolished and rebuilt in brick or stone. At Castle Bromwich, however, the architect, Thomas White of Worcester decided to leave the medieval wooden church where it was and to build round it in brick.

People in old timber-framed houses often had their houses faced with brick in the Georgian period to keep up with the fashion. It is thought, for instance, that Beechcroft Farm on the Chester Road may have timber-framing inside although it cannot be seen now.

But, as far as we know, Castle Bromwich has the only church in the country where a timber-framed building was encased in brick.

A. After Sir John II's time, nobody did know.

A well-known Birmingham architect, Charles Bateman used to live in Rectory Lane opposite the church. In 1893 he was doing repairs to the church. He had lived in Castle Bromwich all his life and had often been puzzled by the church. The chancel was too big for an 18th century church and he couldn't think why. And more puzzling was the fact that the pillars inside the church do not line up with the windows. 18th-century architects did not build churches like that.

When Bateman climbed up the ladder into the roof space, he was in for a surprise. Instead of an 18th-century roof, he discovered the massive oak timbers of a medieval church.

And down inside the church he cut away the plaster on one of the columns. instead finding 18th-century brick, there were the enormous wooden pillars cut from trees 500 years previously.

While Charles Bateman was working on the church, he also took off some of the wooden panels in the chancel. To his amazement he found a stone wall behind them. Not only had the architect Thomas Wilson bricked up the medieval timber church, he had also encased in brick the Norman church built 800 years before.

The pictures below show what Charles Bateman discovered:

1  The chancel was bigger than most 18th-century churches.

2  The pillars did not line up with the windows.

3  The medieval timbers are far bigger than 18th-century ones.

4  You can see medieval wood underneath the plaster, not 18th-century brick. 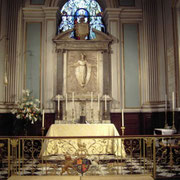 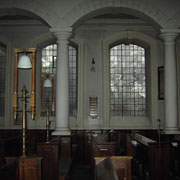 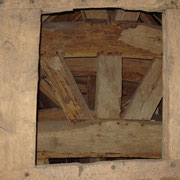 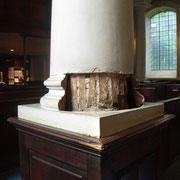 A Gallery of pictures of the 18th-century church 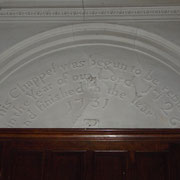 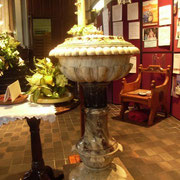 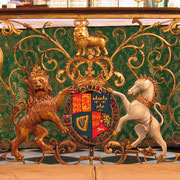 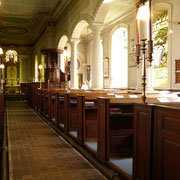 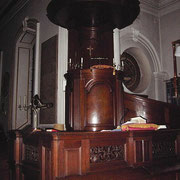 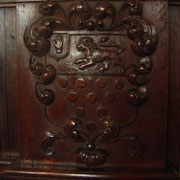 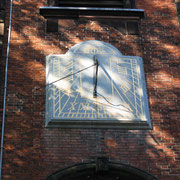 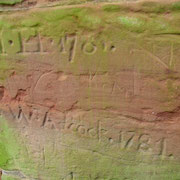 This pair of silver flagons for communion wine and the paten or plate for communion wafers were made in London by a well-known silversmith, Anthony Nelme.

The paten is engraved with the inscription:

'A Gift to Castle Bromwich Chapple

It is not known who gave this very expensive item to the church. It have been Sir John Bridgeman II. However, he was not the only wealthy person in Castle Bromwich.

The year 1723 was two years before Sir John Bridgeman II began work to rebuild the old wooden church in brick.

Sir John Bridgeman II had the three medieval church bells melted down and made into a ring of five in 1717. We know this date because it is written on the bells, which were made by Joseph Smith of Edgbaston.

However, Sir John did not start building the tower of his new church until 1724.

The old medieval belfry was not big enough for five bells.

Q. So where were the five bells in the meantime?

It has been suggested that a tower was built at the west end of the church, perhaps out of brick and wood. The five new bells would have been hung there in 1717.

And then in 1725 Sir John II decided to rebuild the whole church in brick - and this tower was pulled down.

It was only there for eight years!

However, there is no way to prove this theory, because the new church was built on top of the place where the tower had been. Any evidence of its existence now lies beneath the church.

In 1725, when the church was about to be rebuilt, the church tower was built first and the five bells of 1717 were hung in it. The rest of the church was rebuilt in brick between 1726 and 1731. It is from the tower of 1724 that Castle Bromwich bells are still rung to this day - nearly 300 years later.

A bit of a mystery

This bell hangs in the clock tower of Derby College. It is the No.3 bell from Castle Bromwich which was made in 1717.

How on earth did it get to Derby?

You will have to go to the Victorian section