The racecourse at Castle Bromwich opened in 1894. Its name was Birmingham Racecourse but it was often called Bromford or Bromford Bridge, because this was the name of the station on the Birmingham-to-Derby railway where race-goers alighted on race days.

The racecourse company rented the land from the Lord Bradford, who was probably very pleased with the deal. The land alongside the River Tame was always liable to flooding.


Lilias Mitchell was a Scottish member of the Suffragettes campaigning for women to have an equal right to vote as men. She had been involved in planting a bomb at a Birmingham railway station and had been arrested. In protest, the racecourse was attacked by a group of Suffragettes who burned down the main grandstand. The cost of the damage ran into many thousands of pounds. Lilias Mitchell was sent to Winson Green prison where she went on hunger strike, became ill and was subsequently released.

During the Second World War the racecourse with Castle Bromwich golf course was used as a prisoner-of-war camp and anti-aircraft post.

When the course had first opened, it was in the countryside. But now the grandstand looked across to the Fort Dunlop rubber factory with other factories and their smoking chimneys close by. By the late 1950s more people were able to buy their own cars and race-goers preferred to drive out to the racecourses at Stratford and Warwick.

The owners of the course decided to sell the land. The final race meeting was held in 1965 and the land was then sold to Birmingham City Council to build the Bromford housing estate.

Most of the roads were named after racecourses and horses and the old winning post was placed at the playground on Bromford Drive (It has since disappeared). However, the old parade ground has been laid out with the original posts close to Regal Croft (See the photograph below - click to enlarge). 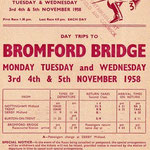 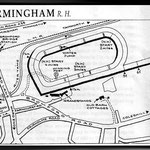 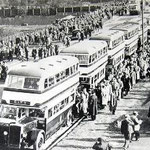 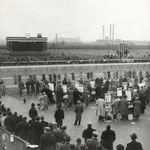 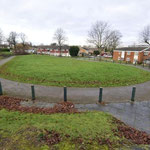