From the First World War until the Second World War, the area which is now called called Castle Vale was the site of Castle Bromwich aerodrome.

For hundreds of years this was an area called Berwood - it was north of the River Tame and was not part of Castle Bromwich at all.

Until the 19th century Berwood was farmland. In the 1890s Birmingham council used the fields to treat sewage. Then in the early 20th century the fields were laid out as football pitches as Castle Bromwich Playing Fields.

But in August 1914 Britain declared war on Germany and this large area of flat land was ideal for use as an airfield. This was now Castle Bromwich Aerodrome.

Let's go back in time a little.


At this time much of Hodge Hill had been laid out as Castle Bromwich Golf Course. This was where the Birmingham inventor, Alfred Pericles Maxfield chose to fly his home-made plane. The course had some long, flat areas of short grass and was on a hill which would give Maxfield's plane some lift.

Alfred Maxfield had a small factory in Aston where he made bikes and motor-bikes. Indeed his first plane was made out of bike and motorbike parts. Maxfield flew his aeroplane successfully a number of times from the golf course in September 1909.

In 1912 the Midland Aero Club club moved here attracting crowds of spectators at the weekend.

In 1914 Castle Bromwich was one of the stops in the Great Air Race from London to Manchester and back. A crowd of 80,000 people came to watch. There is a story of a French pilot who was running out of fuel, so he landed his aeroplane in a farmer's field near Coventry. A lady motorist kindly let him take two gallons of petrol from her car. Unfortunately, this was not quite enough to reach Castle Bromwich Playing Fields. He made a crash landing on Castle Bromwich racecourse and could go no further.

But the fun was to come to a sudden end.

In 1915 the army set up an army squadron to train aeroplane pilots for the war. At first there were only six trainees and four planes. There was nowhere for them to live, so they had to sleep in tents and use the football pavilion as their living quarters.

Although the playing fields provided a wide, flat, grassy site, it was not the best place for an airfield. The trainees had to take care not to land on the railway line or crash into the telegraph poles alongside it. Some land at the end of the runway was still used by Birmingham as a sewage works and the pilots sometimes overshot the runway and landed in the sewage tanks.

The trainee pilots tended to be a happy-go-lucky bunch. It was just as well. Flying was a very dangerous business in those days.

There were over 70 accidents at Castle Bromwich during the First World War; 30 pilots were killed and 50 were seriously injured.

Most of the airmen were British although some came from Australia, Canada, India, South Africa and the USA. A number of them are buried in Castle Bromwich graveyard.

Some of the First World War graves at Castle Bromwich 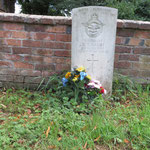 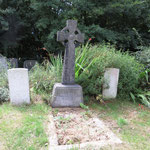 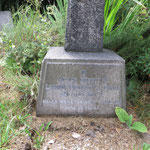 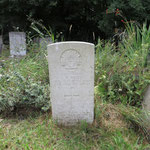 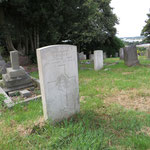 Read the story of one flying accident on the Castle Bromwich Community Project website.

The War Office decided to keep the aerodrome for military use. However, it was also used by the Midland Aero Club until 1937 and for private aircraft, especially during the weeks of the British Industries Fair.

The photograph shows Castle Bromwich Aerodrome in the 1920s. There are some buildings at the Chester Road end of the airfield, but the airfield is actually just a big, flat, grassy field.


At least ten different squadrons used the Aerodrome at different times, but the best remembered is the 605 Squadron which was set up as a bomber squadron, known as the 'County of Warwick' squadron.

There is a memorial at St Cuthbert's church in Castle Vale.

The British Industries Fair - the BIF

The British Industries Fair (BIF) was set up in London after the First World War as a showcase for British products.

In 1920 a Midlands BIF opened in the aircraft hangars at Castle Bromwich. They were alongside the railway and had their entrance on the Chester Road next to Castle Bromwich station.

In I933 a regular air service began between Birmingham, Cardiff and Plymouth in a 6-seater aircraft. The single fare to Cardiff cost £2, twice the price of the train. It was soon possible to fly to Liverpool and London from Castle Bromwich.

The King's Cup Race began in 1922 as an annual race for light aircraft. The first race was from Croydon to Glasgow with a stop at Castle Bromwich.

In 1927 the first Birmingham Air Pageant at Castle Bromwich drew 100,000 people to the aerodrome. They paid 1 shilling to watch the Royal Air Force teams perform aerobatics and mock battles. Imperial Airways demonstrated their new deluxe airliner, the Argosy, which was designed to carry 20 passengers in comfort between London and Paris. The plane was named 'City of Birmingham’ for the event and the Lord Mayor of Birmingham flew over the city in the aircraft. The air pageants were held until the 1950s. 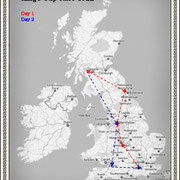 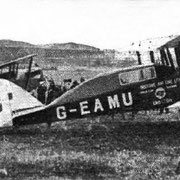 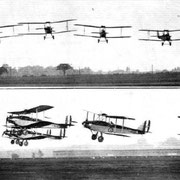 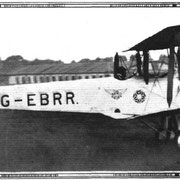 As flying became more popular and safer, Britain's cities raced to see which would be the first to have its own airport. Manchester set up an airfield in 1928 and in the same year Birmingham City Council proposed using Castle Bromwich as Birmingham's airport.

However, it was not to be.

With the threat of war from Adolf Hitler's Germany in 1933, the British War Office again took over Castle Bromwich aerodrome for use by the RAF.

Castle Bromwich would probably not have been chosen as Birmingham's airport anyway. There were too many problems with the site: it was too close to the River Tame, the Birmingham-Derby railway line and the sewage works. And the smoke blown eastwards from Birmingham's factory chimneys to Castle Bromwich added to the fog from the low-lying land around the river meant that flying was often impossible.

Elmdon airport was opened in 1939; it is now Birmingham International Airport.

The Spitfire was the most advanced fighter plane of its time. Factories to build thousands of them were set up in Southampton and at Castle Bromwich. (The Spitfire factory is now the Jaguar factory on the Chester Road.)

More than 12,000 people worked at the factory making it the biggest of its kind in the country.


More than 50 Spitfires were made here every week. By the end of the war more than 12.000 Spitfires had been made at Castle Bromwich.

After 1941 Lancaster bombers were also made here. When they were finished, the planes were taken across the Chester Road and tested before being flown to bases across the country.

During the war German bombers made the Castle Bromwich factory their target. From 1940 the factory was hit by over 200 bombs with many workers injured and some killed. Some of the bombs fell on Castle Bromwich.

To watch a film on YouTube of chief test pilot, Alec Henshaw testing a Spitfire in 1941,
click here.

The Castle Bromwich Spitfire factory closed at the end of the war and was converted into a factory making bodies for cars, including Minis; from 1977 it became the home of Jaguar cars.

The Aerodrome was still used as an RAF training station and the RAF put on air displays were held here every year until 1957 commemorating the anniversary of the Battle of Britain.

The Aerodrome was also used for passenger flights. The world's first helicopter service began here taking passengers from London to the British Industries Fair at Castle Bromwich in 1950.

On 7th June, 1955 Her Majesty the Queen approved a Unit Badge for use by Royal Air Force, Castle Bromwich. The design of the badge is intended to symbolise the Station's close ties with the City of Birmingham, and consists of a sprig of broom enfield by a mural crown taken from the city's own crest.

The sprig of broom portrays the location of the unit i.e. Castle Bromwich - "where the broom grows", as it once did in profusion at Castle bromwich. the motto "Spra urbem alae nostrae volant" may be translated as "Our Wings rise over the City".

From 1954 to 1958 a Spitfire stood by the gates of Castle Bromwich aerodrome.  It is now on display in Thinktank in Birmingham.

The Aerodrome closed in 1960 and the site and was sold to Birmingham City Council to build the houses that would become Castle Vale. Building started in 1964 and was finished by 1969.

Every year there has been a service of remembrance for the people who were killed during the war. This takes place at the Altar of Remembrance on Castle Bromwich Green. In 2014 there was a service in the church graveyard remembering the day 100 years before on which the First World War started, 4 August 1914. 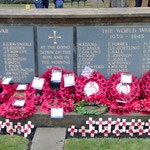 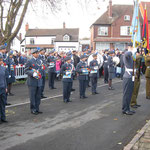 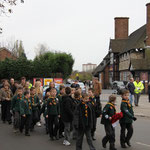 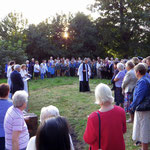 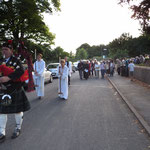 Find out more about the Spitfire on the London Science Museum's website and take a look at photographs of the factory making them on The Spitfire Site. (Opens on a new page.)

The Spitfire factory is now the Jaguar factory. If you've 45 minutes to spare, click here to see how the Jaguar XJ luxury saloon is made at Castle Bromwich - largely by robots.